The role of the Port of Hamburg in trade with China

Despite the general weakness of the global economy, trade relations between Germany and China remain stable. In 2018, goods worth almost 200 billion euros were traded between the two countries, making Germany the most important trading partner for the People’s Republic. The Netherlands and the USA rank second and third respectively. Germany mainly exports goods from the automotive industry and machinery, whereas Germany imports computers and electronic goods from China. 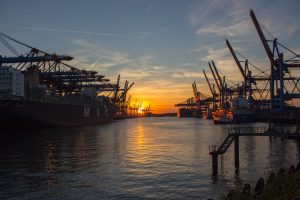 Hamburg plays a special role in these relations. Since 1986 the city has maintained a city partnership with Shanghai, since 2004 a port partnership with Shanghai, since 2007 a port partnership with Shenzhen, and further port cooperations with Chinese coastal cities. In the meantime, around 550 Chinese companies are based in Hamburg. Minister of State Niels Annen sees Hamburg as the “central location in Germany for goods traffic to and from China” (Interview Port of Hamburg Magazine, June 2019). The Port of Hamburg acts as the most important transshipment centre. Only recently it was awarded “Best Global Seaport” by the readers of the trade journal Asia Cargo News. He was even able to assert himself against the Chinese ports in Hong Kong and Shenzhen.

Hamburg’s port is well connected with China by sea and also by land. The New Silk Road is said to offer a huge opportunity for the Port of Hamburg to further expand its trade relations. The “Belt & Road Initiative” is intended to successfully expand freight traffic to the railways.

A comparison of the means of transport reveals further advantages: ships are the cheapest option, but take up a long delivery time of around 30 days. Transport by air is clearly the fastest option, but costs almost 16 times as much. Rail transport therefore offers a good average with a delivery time of 14 days and a moderate price increase compared to shipping. These possibilities are already being used and expanded in the Port of Hamburg. The Port of Hamburg Magazine states (June 2019, p.14): “Around 177 weekly container train connections were offered between Hamburg and Chinese destinations in 2017; this year there are already over 200 connections. Around 120,000 containers were transported by rail between Hamburg and China last year.”

However, trade relations between Germany and China are also being affected by the ongoing and hardening trade conflict between the USA and China. In an interview with Port of Hamburg Magazine, Nils Annen wishes to see a Europe-wide, clear policy on China in order to be able to meet the coming challenges.JT